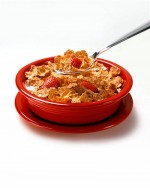 Amy - My favorite cereal is Special K Red Berries, although I do eat a lot of oatmeal.

Cathy – Plain ol’ Cheerios…..been eating them almost every day since I was a kid.

Christy – My favorite cereal is hands down Cinnamon Toast Crunch!

CW – My favorite cereal is Cocoa Pebbles. You eat the cereal, leave the milk, pour in more cereal and milk, and then you’re left with a super-sweet chocolate milk to drink afterwards!

Doug – English Muffins are my “cereal.”

Dylan – My favorite cereal is Honey Bunches of Oats.

Jandy – As a kid Kelloggs’ Sugar Pops was my absolute favorite cereal. Whenever my mom would buy the small box assortments of cereals, I would always negotiate with my brother and sister so that I would get the box of Sugar Pops! Now, as an adult, I’d say that my favorite cereal is Quaker Oatmeal Squares.

Jim – I don’t eat cereal, but I might be coo-coo for Cocoa Puffs from what I hear!

Jo Ann - I typically drink Carnation Instant Breakfast every morning. However, if I have cereal, I like Special K or Multi-Grain Cheerios—topped with bananas and blueberries!

Joe - I have a bowl of Cheerios with my daughter, Hannah, every day to start the day!

Ken – I tell everyone that my favorite cereal is Total Raisin Bran. But, my true favorite is Kellogg’s Honey Smacks.

Laurie S. – I don't eat cereal. I prefer Grits or Cream of Wheat.

Marybeth – I enjoy Granola with yogurt and Oatmeal with butter and salt.

Melissa – My favorite cereal is Rice Krispies with a banana sliced on top!

Mike – I’m a night-time cereal snacker. I really love the sugary kids’ cereals like Lucky Charms, but try to sneak in more healthy choices as well. I have been known to snack on a bowl of oatmeal, Raisin Bran and Frosted Mini Wheats.

Nina – My favorite cereal is Oatmeal Squares, as a mobile snack or in milk.

Pat – I have not eaten cereal since I was young, but I liked Cap’n Crunch’s Crunch Berries.

Paula – Captain Crunch Peanut Butter! I like to eat it plain as a snack rather than in a bowl of milk.

Thomas – I don’t eat much cereal, but as a kid I loved all the cereals loaded with sugar like Trix, Cinnamon Toast and Cocoa Puffs.

Tracy – My favorite cereal is just plain Cheerios (I add my own sugar and bananas/strawberries if I have them). Apparently I come from a long line of boring eaters. There is a story about my grandpa going to a Baskin Robbins 31 flavors ice cream store for the first time. All he wanted was vanilla and didn’t understand why they kept offering to “mess up his perfectly good ice cream with other flavors and toppings.” LOL

Zach – Plain Chex cereal or anything that isn’t super sweet.